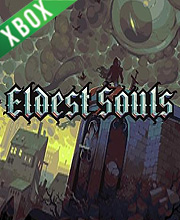 It's a digital key that allows you to download Eldest Souls directly to Xbox One from Xbox Live.

How can I find the best prices for Eldest Souls on Xbox one?

Eldest Souls incorporates two of the best traits from a Souls game: challenging boss-fights and a minimalist storytelling approach. You will die a lot, but at the same time you will never feel cheated by the game — au contraire, you will find yourself on that “one more try” loop, unable to put the controller down until you find out a nice build combination to defeat a boss. And when you do, the satisfaction is near-instant.