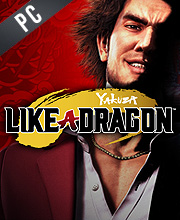 It's a digital key that allows you to download Yakuza Like a Dragon directly to PC from the official Platforms.

How can I find the best prices for Yakuza Like a Dragon CD keys?

Yakuza: Like a Dragon swaps out its long-running protagonist and gameplay tropes to magnificent results. The team at Sega has crafted one of the most absurd, most entertaining, and most fun JRPG I’ve played in years.

Perhaps the biggest hindrance to writing this review was simply that I wanted to keep on playing. At its best, Yakuza: Like a Dragon has had as much heart and character as any of the strongest games in the franchise. At its worst, it’s still been a game that I can’t get enough of. The team’s writing has continued to improve with each installment since Yakuza 0. Yakuza 7 is well on its way to letting Kasuga rub shoulders with Kiryu’s greatest adventures. Sadly, I still haven’t seen how it ends up, but nearly everything I have seen has been wonderful thus far. It’d take a Final Fantasy 7 Remake level of poorly executed endings to really sour the experience, yet even then, I can say that Yakuza: Like a Dragon would’ve been worth it.

Yakuza: Like a Dragon transforms the long-running beat’-em-up series into a Japanese role-playing game—and it’s shockingly good. Though it retains some of the past games’ clunky character animations, Like a Dragon’s action-packed combat and engaging story make it a must-own RPG.

Get 4 themed costume packs for customizing your party:

Get 3 sets of Management Mode Employees to add to your roster:

Get 3 karaoke packs that add new songs to the jukebox at Survive Bar.

A great game, I love the Yakuza saga. I have a great time playing it.

It look very interesting, for sure i’m gonna try it!!!

one of the best anime games, wont lie, big fan of the story as well. would highly recommend