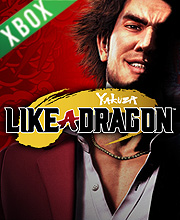 Buy Yakuza Like a Dragon Xbox One Compare Prices

It's a digital key that allows you to download Yakuza Like a Dragon directly to Xbox One from Xbox Live.

How can I find the best prices for Yakuza Like a Dragon on Xbox one?

Yakuza: Like A Dragon isn’t just a great Yakuza title — it’s legitimately one of the best modern role-playing games there is. If this is your first foray into the Yakuza series, Yakuza: Like A Dragon provides an ideal starting point. If you’re a long-time fan of the Yakuza franchise, you’re about to find your new favorite entry.

Yakuza: Like a Dragon is about the importance of friendship and striving to become a better person, which is a message we could all do with right now. It also happens to be a sensational new dawn for a series that’s brave enough to shake up the formula and accomplished enough to pull it off with aplomb. To quote Ichi, “let’s do some hero shit!”

Much like Kasuga’s dragonfish tattoo feels like a quirky but faithful successor to Kiryu’s dragon, Yakuza: Like a Dragon rebuilds the franchise by leaving a lot of it in place. The new protagonist doesn’t feel like he has seven games of story in him, but his eagerness to join the fray could carry the next few entries. And hey, if you want another game with the classic combat style, there’s always a chance of a Judgment sequel.

The Day Ichi Steelbook Edition includes a physical copy of the base game, a special steelbook to store your game in, plus the Legends Costume Pack pre-order bonus.

Get 4 themed costume packs for customizing your party:

Get 3 sets of Management Mode Employees to add to your roster:

Get 3 karaoke packs that add new songs to the jukebox at Survive Bar.