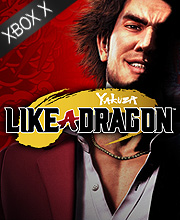 It's a digital key that allows you to download Yakuza Like a Dragon directly to Xbox Series X from Xbox Live.

How can I find the best prices for Yakuza Like a Dragon on Xbox Series X ?

Ryu Ga Gotoku Studio has topped themselves once again with Yakuza: Like a Dragon! This new take on Yakuza brings a lot of fun, new ideas to the table while remaining its heartfelt self. Turn based combat is somehow a perfect fit for this new direction, the characters are all instantly loveable, and the story is endearingly melodramatic.

Like a Dragon is a departure from the games that came before it, but I found those changes to be revitalizing. As much as I enjoyed the Yakuza formula, it was definitely a formula. Like a Dragon has enough familiar elements to make it feel like, at its heart, it’s a Yakuza game. All the while, I fully appreciated how much of a new identity this entry is establishing. Here’s hoping this is the first step in yet another great journey for the series.

Yakuza fans were anxious about whether the series would survive without the glue of Kiryu Kazama to hold it together. However, Ichiban Kasuga is a worthy successor to the Dragon of Dojima, and Like a Dragon is a great new start for this fantastic series that will please long-time Yakuza fans and newcomers alike.

The Day Ichi Steelbook Edition includes a physical copy of the base game, a special steelbook to store your game in, plus the Legends Costume Pack pre-order bonus.