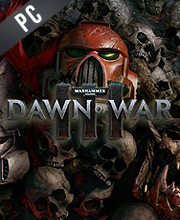 It's a digital key that allows you to download Warhammer 40K Dawn of War 3 directly to PC from the official Platforms.

How can I find the best prices for Warhammer 40K Dawn of War 3 CD keys?

Allkeyshop.com compares the cheapest prices of Warhammer 40K Dawn of War 3 on the digital downloads market to find the best sales and discount codes on trusted stores.

Enter a bloody conflict between three opposing factions. When a disastrous weapon is discovered on the enigmatic world of Acheron, you will have no choice but to confront your enemies in Dawn of War III. Supremacy must finally be put to an end for survival as a result of the ongoing battle and the planet’s siege by the armies of the powerful Space Marine commander Gabriel Angelos, the ambitious Eldar seer Macha, and the rapacious Ork warlord Gorgutz.

The Collection Edition contains the base game and include the following features:

The Limited Edition contains the base game and the following features:

Nice Rts popular game. I have added to my wishlist.

Kinguin/G2A, just because I’ve done transactions on them and I know they are legit

InstantGaming is the fastest and safest site out there for keys!

Very nice game, would recommend everyone to buy it!

I always trusted G2A more than any of these, its not the cheapest but reliable