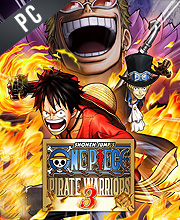 What is One Piece Pirate Warriors 3 CD key?

It's a digital key that allows you to download One Piece Pirate Warriors 3 directly to PC from the official Platforms.

How can I find the best prices for One Piece Pirate Warriors 3 CD keys?

Allkeyshop.com compares the cheapest prices of One Piece Pirate Warriors 3 on the digital downloads market to find the best sales and discount codes on trusted stores.

One Piece: Pirate Warriors 3 is a action video game published and developed by Tecmo Koei and Omega Force. The main themes of this game is the animation and Manga.

The story begins in the small village of the kingdom of Fuschia Dressrosa on an island controlled by Don Quixote Doflamingo. You’ll have to deal with ruthless pirates when you sail to the most remote regions (Punk Hazard, Marineford ..). On board your ship, take part in beautiful sea battles within your world.

One Piece: Pirate Warriors 3 features moving images and sophisticated graphics that a delight to see and engage in. The game is also equipped with an impressive number of popular characters that promotes the development of history and causes instant immersion.

The gameplay has been reviewed in this version and you now have a co-op mode that will allow you to share incredible moments in the game with your friends!

In short, all the ingredients are here to make this One Piece: Pirate Warriors 3 a must have modern video game. If you like Manga universe and action here is a mixture that will not leave you unmoved.

I’m sure these comments are all bots. Just buy from wherever is cheapest.

It appears G2A has the best price as of this writing.

And it still does… It’s one of the best websites to buy cd keys from!

gamesrocket.com is the best store to buy a One Piece Pirate Warriors 3 Cd key.