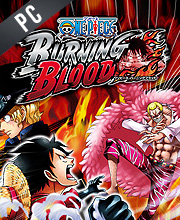 What is One Piece Burning Blood CD key?

It's a digital key that allows you to download One Piece Burning Blood directly to PC from the official Platforms.

How can I find the best prices for One Piece Burning Blood CD keys?

Allkeyshop.com compares the cheapest prices of One Piece Burning Blood on the digital downloads market to find the best sales and discount codes on trusted stores.

The famous quirky pirate Luffy is back with the gang in One Piece: Burning Blood. The game features an artstyle that is cell shaped just like the anime One Piece. The fighting game is dynamic and colorful also giving you a roster of around 40 playable characters to choose from.

Prepare yourself for destructive combos and wacky action in this fast-paced fighting video game. Also the Logia Devil Fruits will bring out amazing special moves that will be devastating to your opponents. The game also features a 3 vs. 3 rumble where you can switch from the 3 characters you’ve previously chosen during an active fight.

An advanced battle system is also featured. With this system players of the game will be able to do stronger attacks while blocking normal attacks from the enemies.

GameLaden is the best store to buy this game at this moment,

As of the current moment gameladen is the best site to buy the game on, but they all have good deals.

MMOGA is offering the best price for the game as of now.

If you like bonuses, go for gamersplanet.com otherwise go to mmoga !