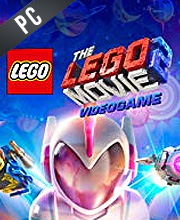 You can participate to these tests by adding comments about your digital download purchase in the store review page. Enjoy the best deals for The LEGO Movie 2 Videogame CD Key with Allkeyshop.com!

The LEGO Movie 2 Videogame is an action–adventure game that was developed by TT Fusion and published Warner Bros for PC.

Join Emmet and a host of heroic characters as they venture beyond their world to save their friends from the alien monster invaders. Journey into outer space, discover new worlds, and test their Master Building skills.

This iteration of the Lego movie video game comes with the fan favorite characters such as Emmet, Lucy and LEGO Batman. They are also accompanied by the mysterious General Mayhem and Rex Dangervest.

You will enjoy the fact that you can unlock and play as over 100 characters from The LEGO Movie 2 and the first film. The developers invite you to journey across the Systar System, discover new worlds and comb the LEGO galaxy or important relics and Master Pieces.

You can even explore new worlds from LEGO Movie 2 and revisit some the iconic locations from the first film.

Of’course a lego game would not be complete without a building and or crafting component. Build special LEGO objects to discover new areas and items.

The LEGO Movie 2 comes with enhanced combat that you will indulge in when you battle against the alien space invaders and deadly bosses.

Region
Steam : STEAM CD KEY : Use the Steam Key Code on Steam Platform to download and play The LEGO Movie 2 Videogame. You must login to your Steam Account or create one for free. Download the (Steam Client HERE). Then once you login, click Add a Game (located in the bottom Left corner) -> Activate a Product on Steam. There type in your CD Key and the game will be activated and added to your Steam account game library.


Steam gift : STEAM GIFT : A Steam gift is a one-time transfer you receive. You activate and install The LEGO Movie 2 Videogame to play on Steam, it is a non-refundable game that stays in your Steam games collection. Please read the store description about any language or region restrictions.


Steam ROW : STEAM KEY ROW : It means for Rest Of the World countries which are not concerned by the region restrictions. This product can't be purchased and activated in Several countries. Please read the store description to know the full list of countries which are concerned. Use the key to Download and play The LEGO Movie 2 Videogame on Steam.

LEGO Movie game is here! Fans of Lord Business will not be pleased. 😉

The LEGO game versions of movies are quite funny, so I’m sure the videogame adaption of the LEGO movie 2 is good also 😀

When i was kid used to play many lego games with friend. Its quite fun to kill some time .

The LEGO Movie 2 Videogame is funny game, you can buy it now with best price.

The game based on a movie, based on a toy. Entertainmentception indeed.