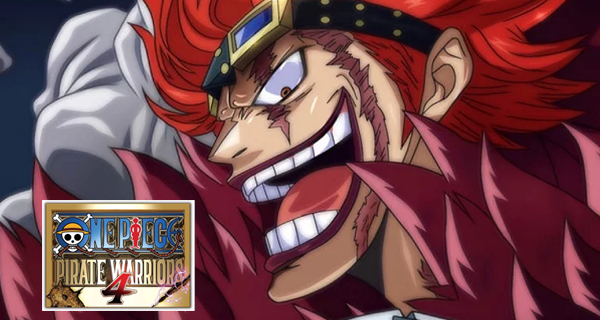 Eustass Kid has been officially confirmed to be a playable character in One Piece: Pirate Warriors 4. Bandai Namco confirmed this to be true in the latest issue of Jump Magazine. The developer also revealed that the Eustass Kid will have two playable forms in the game.

The first form is his pre-timeskip form and the other is his form after the two-year timeskip; when he had acquired his mechanical left arm.

Those who are familiar with One Piece anime and or manga series will tell you of Eustass Kid’s Devil Fruit power, which allows him to repel and attract metals within his vicinity. This is one attribute that has been incorporated in his kit in One Piece: Pirate Warriors 4.

As Eustass, you will be able to reflect cannonball attacks back to the shooter or merge a bunch of metallic objects to create a gigantic metal arm. Now you can only imagine the type of damage he can do with this gigantic arm but soon you will witness him and his arm in full effect when One Piece: Pirate Warriors 4 releases on March 26, 2020, in Japan. The game releases for the rest of the world on March 27, 2020.

Unfortunately, Eustass Kid has not been featured much in One Piece games but better late than never.

If you haven’t seen the new special moves trailer of One Piece: Pirate Warriors 4 yet, check it out below:

This is the fourth and most ambitious installment in the Pirate Warriors video-game series, so what better time is there for the charismatic, impulsive, emotionally-driven, violent Eustass kid to make an entrance?

One Piece: Pirate Warriors 4 will be available for the PlayStation 4, Xbox One, Nintendo Switch and PC.