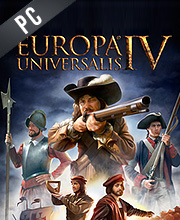 It's a digital key that allows you to download Europa Universalis IV directly to PC from the official Platforms.

How can I find the best prices for Europa Universalis IV CD keys?

Allkeyshop.com compares the cheapest prices of Europa Universalis IV on the digital downloads market to find the best sales and discount codes on trusted stores.

This is the fourth installment in the Europa Universalis series. Your goal is to take control of a nation and guide it through the years to merge as a dominant global empire. As a ruler of the nation, you have to explore, trade with other nations, wage war, and/or let diplomacy reign over you and other nations.

Paradox Development Studio has shown that it understands grand strategy like no other studio. Europa Universalis IV is the defining game in the genre, laying out the whole world in front of players and just letting them have at it. It’s a polished, almost terrifyingly vast title that gets its hooks in you the moment you click on that first country, and simply refuses to let go.

So, Paradox have done it again – learning from the design of Crusader Kings II, Europa Universalis is an excellent starting foundation.

Europa Universalis 4 Conquest of Paradise focuses on the exploration of the new world. Get to send off ships, establish colonies, trade with native tribes or take their lands.

Find all the best prices for Europa Universalis IV DLCs on Allkeyshop!

EPIC GAMES KEY : Region Free / Worldwide. Requires Epic Games Launcher App in order to play the game. You need to create a free account here in order to download Europa Universalis 4 from Epic Plateform . Read the description on the store page about any language or country restrictions.
EU STEAM CD KEY: Requires an EUROPEAN IP address or you must activate it with a VPN (Virtual Private Network) in order to play Europa Universalis 4. Might have languages restrictions or language packs. Read the description on the store game page to know if the EU IP is only needed for activation or for playing also (maybe on EU Servers). Most of the stores offer you their help, or show you how to do this with a tutorial to follow.
EUROPEAN STEAM GIFT : It’s a steam gift for Europe which requires an European IP address to activate and to play Europa Universalis 4 on Steam. Read carefully the store description about region and language restrictions.
STEAM GIFT : A Steam gift is a one-time transfer you receive. You activate and install Europa Universalis 4 to play on Steam, it is a non-refundable game that stays in your Steam games collection. Please read the store description about any language or region restrictions.
STEAM CD KEY : Use the Steam Key Code on Steam Platform to download and play Europa Universalis 4. You must login to your Steam Account or create one for free. Download the (Steam Client HERE). Then once you login, click Add a Game (located in the bottom Left corner) -> Activate a Product on Steam. There type in your CD Key and the game will be activated and added to your Steam account game library.
STEAM KEY ROW : It means for Rest Of the World countries which are not concerned by the region restrictions. This product can't be purchased and activated in Several countries. Please read the store description to know the full list of countries which are concerned. Use the key to Download and play Europa Universalis 4 on Steam.
Windows 10 Global : This is an Worldwide Microsoft code to play on PC for Worldwide . You need to have installed Windows 10 Anniversary Edition update on your PC. Log into your Microsoft account to download and play. Read closely the description given by the store to activate your game.
Bundle
Bundle 1
Cadet Edition
Collection
DLC Collection
Deluxe Edition
Extreme Edition
Founder's Pack
Standard Edition
Compare Choose & Buy Download (710)

One of the best strategy games out there! When you get hooked up on the game, the only thing that might stop you from playing will be DLC price tags or subscription costs.

A must have for strategy fans! I suggest to buy also some dlc’s

The best grand strategy Ive ever played. And now with the base game and a small subscription you can play with all dlc’s for a fraction of the full price. Highly recommend

Europa Universalis games are a gaurantee in the field of strategy game! However long time spent in the game is required to completely understand all of its mechanics.