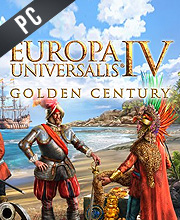 You can participate to these tests by adding comments about your digital download purchase in the store review page. Enjoy the best deals for Europa Universalis 4 Golden Century CD Key with Allkeyshop.com!

Christopher Columbus was not the pioneer of voyages, however his voyages are unparalleled in human history. Said voyages to the New World were hastily exploited by the Spanish Crown. This birthed a century of Spanish dominance spearheaded by the Catholic kingdom at the center of European politics. The acquired wealth from excavated foreign lands laid the foundations upon which the Spanish built a global empire. Recreate the era of empire building from the Reconquista to the treasure fleets.

There are many cool features of Golden Century, some of which are minority expulsion, establishing orders, new mission trees, pirate republics and more…

The DLC also comes with a content pack that includes new Iberian army units, new Iberian ship models, new berber ship models and new music. You can play as a single player or with friends in multiplayer. The game also allows for cross-platform play. Europa Universalis 4 Golden Century is available for PC as of December 11, 2018 and is attainable trough the Steam Store.

STEAM CD KEY : Use the Steam Key Code on Steam Platform to download and play Europa Universalis 4 Golden Century. You must login to your Steam Account or create one for free. Download the (Steam Client HERE). Then once you login, click Add a Game (located in the bottom Left corner) -> Activate a Product on Steam. There type in your CD Key and the game will be activated and added to your Steam account game library.
EUROPEAN STEAM GIFT : It’s a steam gift for Europe which requires an European IP address to activate and to play Europa Universalis 4 Golden Century on Steam. Read carefully the store description about region and language restrictions.
STEAM GIFT : A Steam gift is a one-time transfer you receive. You activate and install Europa Universalis 4 Golden Century to play on Steam, it is a non-refundable game that stays in your Steam games collection. Please read the store description about any language or region restrictions.
DLC. (Downloadable content) It's an Add-on. You need the game in order to use it.

Be the first one to write a review about Europa Universalis 4 Golden Century !