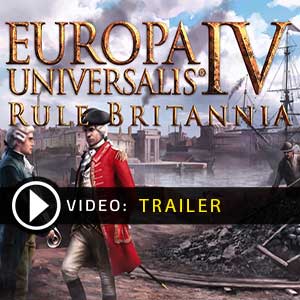 It's a digital key that allows you to download Europa Universalis 4 Rule Britannia directly to PC from the official Platforms.

How can I find the best prices for Europa Universalis 4 Rule Britannia CD keys?

Allkeyshop.com compares the cheapest prices of Europa Universalis 4 Rule Britannia on the digital downloads market to find the best sales and discount codes on trusted stores.

Set in England in the mid 15th century, you must rise from the ashes of war and become the nation that is called Great Britain. Rise through civil wars, religious upheaval, great fires and crazy unions and be the most powerful nation there is.

Featured in this Immersion Pack is a new British Mission, a new Industrial Revolution, new rewards to unlock knowledge, a new naval doctrine that gives bonuses for ship maintenance, trade power or battle performance, a new Protestant faith, as well as knowledge sharing.

Some improvements are also included in the pack like the new unity pack, new army designs, new units, new nations as well as new music.

EU STEAM CD KEY: Requires an EUROPEAN IP address or you must activate it with a VPN (Virtual Private Network) in order to play Europa Universalis 4 Rule Britannia. Might have languages restrictions or language packs. Read the description on the store game page to know if the EU IP is only needed for activation or for playing also (maybe on EU Servers). Most of the stores offer you their help, or show you how to do this with a tutorial to follow.
EUROPEAN STEAM GIFT : It’s a steam gift for Europe which requires an European IP address to activate and to play Europa Universalis 4 Rule Britannia on Steam. Read carefully the store description about region and language restrictions.
STEAM GIFT : A Steam gift is a one-time transfer you receive. You activate and install Europa Universalis 4 Rule Britannia to play on Steam, it is a non-refundable game that stays in your Steam games collection. Please read the store description about any language or region restrictions.
STEAM CD KEY : Use the Steam Key Code on Steam Platform to download and play Europa Universalis 4 Rule Britannia. You must login to your Steam Account or create one for free. Download the (Steam Client HERE). Then once you login, click Add a Game (located in the bottom Left corner) -> Activate a Product on Steam. There type in your CD Key and the game will be activated and added to your Steam account game library.
STEAM KEY ROW : It means for Rest Of the World countries which are not concerned by the region restrictions. This product can't be purchased and activated in Several countries. Please read the store description to know the full list of countries which are concerned. Use the key to Download and play Europa Universalis 4 Rule Britannia on Steam.
Windows 10 Global : This is an Worldwide Microsoft code to play on PC for Worldwide . You need to have installed Windows 10 Anniversary Edition update on your PC. Log into your Microsoft account to download and play. Read closely the description given by the store to activate your game.
Bundle
DLC

The newest DLC pack for EU4 where you can master wind and trade, and spark industrial revolution in Rule Britannia. The base game is a fantastic historical strategy game (currently at 82% reviews on steam) i can only highly recommend it to anyone currently looking for a great grand-scale strategy game.

Another DLC for EU IV this time for England, best price is on game.com UK

2Game.com has the cheapest price for this dlc, so consider buying it from them.

I dont know this game and dome friends should be interressed.
Have fun

Nice deals and excellent games every day. Thanks for giveaways