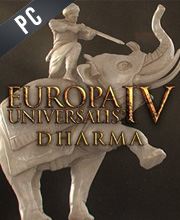 It's a digital key that allows you to download Europa Universalis 4 Dharma directly to PC from the official Platforms.

How can I find the best prices for Europa Universalis 4 Dharma CD keys?

Allkeyshop.com compares the cheapest prices of Europa Universalis 4 Dharma on the digital downloads market to find the best sales and discount codes on trusted stores.

This new expansion will include new Indian Estates giving India five new castes. Also, new Indian mission trees are made available. Players will also have the option to create their government and define how they govern their estates. The policy system has gotten a rework having added special bonuses to the system. Get to upgrade and improve your trade company investments to the neighboring nations.

A new Mughal Culture bonus is added which allows players to assimilate as well as accommodate other newly conquered cultures easily. Upgraded trade centers come with the expansion as well as other charter companies.

Other features also available are a host of new achievements, some multiplayer teams, brand new art, some scornful insults, the monsoon season, new ways for players to suppress rebellions as well as new uses for colonists.

STEAM CD KEY : Use the Steam Key Code on Steam Platform to download and play Europa Universalis 4 Dharma. You must login to your Steam Account or create one for free. Download the (Steam Client HERE). Then once you login, click Add a Game (located in the bottom Left corner) -> Activate a Product on Steam. There type in your CD Key and the game will be activated and added to your Steam account game library.
EU STEAM CD KEY: Requires an EUROPEAN IP address or you must activate it with a VPN (Virtual Private Network) in order to play Europa Universalis 4 Dharma. Might have languages restrictions or language packs. Read the description on the store game page to know if the EU IP is only needed for activation or for playing also (maybe on EU Servers). Most of the stores offer you their help, or show you how to do this with a tutorial to follow.
EUROPEAN STEAM GIFT : It’s a steam gift for Europe which requires an European IP address to activate and to play Europa Universalis 4 Dharma on Steam. Read carefully the store description about region and language restrictions.
STEAM KEY ROW : It means for Rest Of the World countries which are not concerned by the region restrictions. This product can't be purchased and activated in Several countries. Please read the store description to know the full list of countries which are concerned. Use the key to Download and play Europa Universalis 4 Dharma on Steam.
STEAM GIFT : A Steam gift is a one-time transfer you receive. You activate and install Europa Universalis 4 Dharma to play on Steam, it is a non-refundable game that stays in your Steam games collection. Please read the store description about any language or region restrictions.
Windows 10 Global : This is an Worldwide Microsoft code to play on PC for Worldwide . You need to have installed Windows 10 Anniversary Edition update on your PC. Log into your Microsoft account to download and play. Read closely the description given by the store to activate your game.
DLC. (Downloadable content) It's an Add-on. You need the game in order to use it.
Collection. Read the store description to know the content.
Bundle. Read the store description to know the content.

Be the first one to write a review about Europa Universalis 4 Dharma !

Gamivo is a really cheap choice for anyone interested in buying this game.

Europa Universalis 4 Dharma is good game, you can buy it now with good price.

From the gameplay videos this looks like a interesting expansion for Europa Universalis 4. Gamivo has the best deal at the moment.

it’s look interesting , i think im gonna give it a try