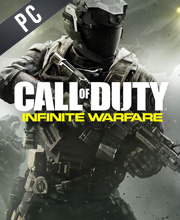 What is Call of Duty Infinite Warfare CD key?

It's a digital key that allows you to download Call of Duty Infinite Warfare directly to PC from the official Platforms.

How can I find the best prices for Call of Duty Infinite Warfare CD keys?

Allkeyshop.com compares the cheapest prices of Call of Duty Infinite Warfare on the digital downloads market to find the best sales and discount codes on trusted stores.

Call of Duty: Infinite Warfare is a first person shooter video game that is developed by Infinity Ward and published by Activision. This is the thirteenth installment from the Call of Duty series.

The game is set in the distant future where the over populated earth has already been stripped of its resources. Humanity now relies on other colonies throughout the solar system to mine special ores that they can use for fuel as energy. However, a threat is slowly rising as the Settlement Defense Front (SetDef) wants to take control of these outposts to gain personal wealth and power.

You will now take the role of captain Nick Reyes, a Tier 1 Special Operations pilot. You, along with your crew will be tasked to put a stop to those who have evil intentions.

Call of Duty Infinite Warfare will be introducing a new setting which is ‘outer space’. Since it is outer space, aerial combat will be available.

You will have the chance to battle in zero gravity. The game promises a seamless transition between combat in space and boots-on-the-ground combat.

You will also have access to the central hub called Retribution. This is where you can start the main campaign missions as well as join secondary guests.

The game offers you a great narrative, packed with action, as well as 3 amazing game modes: campaign, multiplayer and zombies.

Zoom 1m 3m 1y All
Track product
EU STEAM CD KEY: Requires an EUROPEAN IP address or you must activate it with a VPN (Virtual Private Network) in order to play Call of Duty Infinite Warfare. Might have languages restrictions or language packs. Read the description on the store game page to know if the EU IP is only needed for activation or for playing also (maybe on EU Servers). Most of the stores offer you their help, or show you how to do this with a tutorial to follow.
GERMAN STEAM KEY : CD Key Steam for Germany. Usually requires German IP address to download and play Call of Duty Infinite Warfare with German Language only. The content might be different from other steam version due to content restrictions in Germany Austria and other countries. Read the store carefully about activation steps, languages and restrictions.
EUROPEAN STEAM GIFT : It’s a steam gift for Europe which requires an European IP address to activate and to play Call of Duty Infinite Warfare on Steam. Read carefully the store description about region and language restrictions.
STEAM CD KEY : Use the Steam Key Code on Steam Platform to download and play Call of Duty Infinite Warfare. You must login to your Steam Account or create one for free. Download the (Steam Client HERE). Then once you login, click Add a Game (located in the bottom Left corner) -> Activate a Product on Steam. There type in your CD Key and the game will be activated and added to your Steam account game library.
Dayone Edition
Deluxe Edition
Legacy Edition
Standard Edition
Compare Choose & Buy Download (772)

Not the best Call of Duty ever… If you never tried COD don’t start from it.

Infinite Warfare is not a disaster as many have said, but it is not the space spectacle we had hoped for.

This game has fun zombie mode. I played it more than multiplayer mode

just outstanding , i enjoy every bit of it , i am hoping the next game will be as good or even better .

yes im love this game because that game it’s big graphic and animation think you for this game …….