Infinity Ward and Activision’s Call of Duty Infinite Warfare DLC dropped today for PlayStation 4. Along with the release is a video trailer introducing all four maps found in this expansion.

The Sabotage DLC includes Noir, Neon, Renaissance and Dominion as the four new maps. Noir is set in Brooklyn but with a futuristic look. Its downtown location has cafes and parks and this is your warzone. Neon offers a digitized battle arena that is designed for a virtual training. This map will have structures spanning out of thin air with enemies breaking into a million pixels when defeated. Renaissance is set in the romantic location of Venice with its narrow streets and many canals. And lastly is Dominion which is a remake of Modern Warfare 2’s Afghan map and is set on Mars.

Also included is Rave in the Redwoods, a four-player co-op zombie game. The Call of Duty Infinite Warfare Sabotage DLC is available by itself for €15 or as part of the Season Pass €50. 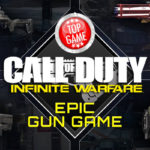 The Call of Duty Infinite Warfare Epic Gun Game is available to be played for 7 days!