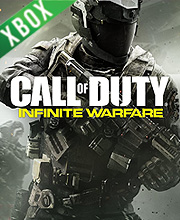 What is Call of Duty Infinite Warfare Game Code?

It's a digital key that allows you to download Call of Duty Infinite Warfare directly to Xbox One from Xbox Live.

How can I find the best prices for Call of Duty Infinite Warfare on Xbox one?

Allkeyshop.com compares the cheapest prices of Call of Duty Infinite Warfare on the digital downloads market to find the best sales and discount codes on trusted stores.

Call of Duty: Modern Warfare is a first-person shooter game published by Activision and developed by Infinity Ward for the Xbox One. Even though it has the same name as the beloved Modern Warfare sub-series of 2009, it is not the same game. It is instead a soft reboot of the series which makes it the sixteenth overall instalment in the revered Call of Duty series.

There are quite a few new and interesting things in the reboot; one of which is the game now takes place in a modern realistic setting. In addition, the game also supports cross-platform multiplayer for the first time in the franchise’s history. Expect improvements and overhauls in many areas but fret not as the said changes do not rob you of the nostalgia you seek but drastically enhances the gameplay experience. Also, bear in mind that the developer has scrapped the traditional season pass concept which now enables the company to distribute free post-launch content to all players.

Great game with good graphics and gameplay, I enjoyed it a lot on PC and I would like to try it on XBOX.

Wasnt aware that this game is also for PC.Didn’t think it would be coming to PC either.

I’d really like this game atleast for the SP, they did some unique things withi t.

Call of Duty games have always been awsome. This one is ok.