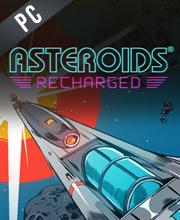 What is Asteroids Recharged CD key?

It's a digital key that allows you to download Asteroids Recharged directly to PC from the official Platforms.

How can I find the best prices for Asteroids Recharged CD keys?

While Asteroids: Recharged is a decent update of the classic game and is a welcome return for the series, it’s also not as effective at tugging on the nostalgia strings as the previous Recharged games. Asteroids as a formula is well-traveled ground, and it’s hard not to miss the long-gone Spheres of Chaos while playing.

Zoom 1m 3m 1y All
Track product
EPIC GAMES KEY : Region Free / Worldwide. Requires Epic Games Launcher App in order to play the game. You need to create a free account here in order to download Asteroids Recharged from Epic Plateform . Read the description on the store page about any language or country restrictions.
GOG.COM CD KEY : You need to register on Gog.com, then use the GOG Key to download and activate your game to play Asteroids Recharged.
STEAM CD KEY : Use the Steam Key Code on Steam Platform to download and play Asteroids Recharged. You must login to your Steam Account or create one for free. Download the (Steam Client HERE). Then once you login, click Add a Game (located in the bottom Left corner) -> Activate a Product on Steam. There type in your CD Key and the game will be activated and added to your Steam account game library.
Bundle
Standard Edition
Compare Choose & Buy Download (791)