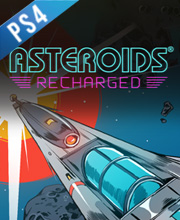 It's a digital key that allows you to download Asteroids Recharged directly to Playstation 4 from PSN (Playstation network).

Asteroids: Recharged is up there with the best of Atari’s Recharged releases and it’s even more fun with a friend. So, if you have fond memories of the 1979 arcade classic or just want to play some simple static shooting, you’ll definitely enjoy this spacefaring blast fest.