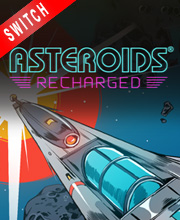 It's a digital key that allows you to download Asteroids Recharged directly to Nintendo Switch directly from Nintendo eShop.

How can I find the best prices for Asteroids Recharged on Nintendo Switch ?

Although these Recharged titles aren’t taking massive risks, this entry is an easy recommendation for anyone who wants to enjoy a rock-solid remake of a classic.

If you’re looking to scratch that classic gaming itch, playing this version of a classic is a welcome addition to the Recharged line of games and is a worthy version worth considering. It’s not perfect, but it’s playable and still as fun now as it was when it dazzled arcade goers in its heyday.

Zoom 1m 3m 1y All
Track product
NINTENDO CODE : This is a digital code for Asteroids Recharged. Use the download code on the Nintendo eShop of your Console. Once connected to the Nintendo eShop, you can enter and redeem the Download Code. Read carefully the store description about any language and region restrictions.
Standard Edition
Compare Choose & Buy Download (803)