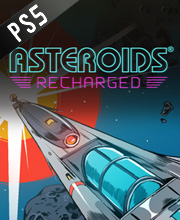 It's a digital key that allows you to download Asteroids Recharged directly to Playstation 5 from PSN (PlayStation Network).

How can I find the best prices for Asteroids Recharged on Playstation 5 ?

While these Recharged games do not really set the world on fire, they are super fun to play, especially for those who may have not played the originals. If you are familiar with the original game, you will love what Sneaky Box has done here. The extra gameplay elements don’t really change the overall feel of the game at all and are welcome additions.