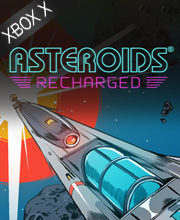 It's a digital key that allows you to download Asteroids Recharged directly to Xbox Series X from Xbox Live.

How can I find the best prices for Asteroids Recharged on Xbox Series X ?

It is a faithful recreation of a stone-cold classic but there isn’t really much else to do with the source material to adapt it into anything else; deviate too far and you risk losing the core components of Asteroids. But as is the case here, do too little to really update things and it’s tough to recommend the reboot.