Ubisoft Spring Sale: Get the Best Deals Plus a Surprise from Ubisoft! 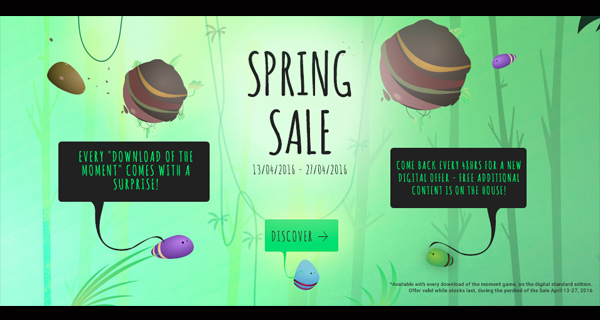 The hottest titles from Ubisoft’s roster of video games are on sale through the annual Ubisoft Spring Sale which started on April 13, 2016. Get awesome Ubisoft games at a discounted price – up to 75% off! PLUS! Ubisoft is also giving out a “surprise” to those who will opt to take advantage of the “Download of the Moment” (schedules listed below for your convenience 🙂 ). You can find more information about this on the Ubisoft Spring Sale page. DOWNLOAD OF THE MOMENT: Aside from the games’ Standard Editions, also on sale are some of their DLCs, figurines, some special editions (i.e. Collector’s Edition, Director’s Cut Edition, etc.). Here are some of the titles that are on sale, and of course we’ve included the best price our trusted stores have to offer for the game so you’ll get to compare prices while you’re at it 😉 Other deals include: Splinter Cell franchise, The Crew franchise, Watch Dogs, Anno franchise, and Assassin’s Creed franchise.

WHAT’S IN IT? Far Cry 4 Limited Edition includes Hurk’s Redemption DLC plus the Harpoon Gun as a bonus weapon