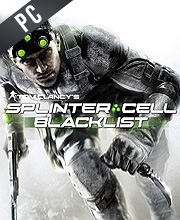 It's a digital key that allows you to download Splinter Cell Blacklist directly to PC from the official Platforms.

How can I find the best prices for Splinter Cell Blacklist CD keys?

Allkeyshop.com compares the cheapest prices of Splinter Cell Blacklist on the digital downloads market to find the best sales and discount codes on trusted stores.

Splinter Cell Blacklist is a third-person action–adventure stealth game developed by Ubisoft Toronto and published by Ubisoft. The game is the seventh installment in the Tom Clancy’s Splinter Cell series, and is also the sequel to Splinter Cell: Conviction.

In single player campaign, you will play as Sam Fisher, and your mission is to stop the Blacklist, a terror ultimatum which is to be initiated by a group of terrorists called The Engineers. Sam is under a race against time, and he needs to find out the one who’s behind the terrorist threat.

The game still stands on the stealth roots the franchise is known for, but players can also define their own personal play style. After each mission is completed, your performance will be graded from among the three categories available: Ghost – if you played the mission using mostly stealth; Panther – playing stealth and being aggressive at the same time; and Assault – if you played with more emphasis on combat.

The game is also bringing back gadgets fans loved in previous games such as the Sticky Shocker, but new ones are also making their appearances like the Snake Cam, for example.

Splinter Cell Blacklist also features a multiplayer mode, The Spies vs. Mercs, which is making a comeback, allowing players to face off in teams of 4.

Great stealth/action game with a good story. I suggest to buy the deluxe edition. It comes with all the DLC and it’s less than 8€ in HRK which in my opinion is an excellent deal.

I thoroughly enjoyed playing this game on my Xbox it is worth every penny .

Hello there, it’s best if you may contact directly the store support and send your details, especially your country where you belong to check if there is VAT added once you buy a game from them. 🙂

This game is awesome! Especially for the stealth loving gamers, buy it you won’t regret it!