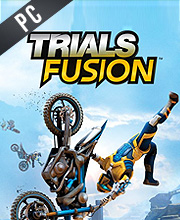 What is Trials Fusion CD key?

It's a digital key that allows you to download Trials Fusion directly to PC from the official Platforms.

How can I find the best prices for Trials Fusion CD keys?

Allkeyshop.com compares the cheapest prices of Trials Fusion on the digital downloads market to find the best sales and discount codes on trusted stores.

Trials Fusion is a racing game developed by RedLynx in collaboaration with Ubisoft Shanghai and Ubisoft Kev, and is published by Ubisoft. It is the fifth installment in the Trials series, and is also one that is well-praised by game critics due to its superb level design, sleek controls, futuristic visuals, and amount of content.

The game is set in the year 2042, during a time when a mysterious object fell from the sky which eventually changed the world we live in. With it also came the creation of the “Anomaly AI”, which gave birth to its descendants SynDI and George. The main character is called Rider, and his character hears the voices of SynDI and George throughout the game.

Like its predecessors, you will control Rider who will navigate a number of obstacles while riding a physics-based motorcycle in a race course from the start of the level until the end. Use your skills to cross obstacles, clear ramps, and set track records against the best Trials players all over the world. The possibilities are endless in this game, as you are also given the option to create a rich world of custom courses through its in-game Editor Mode. The competition never ends as you get to race alone, or with friends, or with other racers around the globe in a worldwide tournament.

Bonus: Trials Fusion + Awsome Level MAX DLC (Can be different or change over time for each seller. Please refer to the seller’s website)