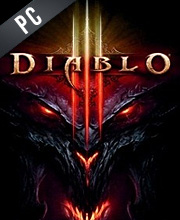 What is Diablo 3 CD key?

It's a digital key that allows you to download Diablo 3 directly to PC from the official Platforms.

How can I find the best prices for Diablo 3 CD keys?

Allkeyshop.com compares the cheapest prices of Diablo 3 on the digital downloads market to find the best sales and discount codes on trusted stores.

Diablo III is an action RPG developed and published by Blizzard Entertainment and is the third installment in the Diablo franchise.

In Diablo III, players choose one of six character classes (Barbarian, Crusader, Demon Hunter, Monk, Witch Doctor, or Wizard) to defeat Diablo, the Lord of Terror. The game features an enhanced quest system along with a random level and encounter generator. Diablo III also gives players the choice to make hardcore characters (characters that cannot be ressurected, and will become unplayable if killed). The game also has more distinct monsters as compared with Diablo I and Diablo II.

In terms of items, although the variety of items is similar to other Diablo games, Diablo III now has Legendary items included on its item list. New weapon and equipment types are also available, giving each character class its own “spacific flavor”.

Expanded game difficulty and achievements are also one of Diablo III’s main features. The advanced difficulty modes add new progression options to the game which cannot be found using the Normal setting. Players get to encounter more powerful and more dangerous monsters, however they also get to uncover more powerful armor sets, items, runes, etc. Players get to show off their achievements through Battle.Net as well.

With a new epic storyline on its, Diablo III is definitely an RPG fan’s delight. Take your gaming experience to the next level and get Diablo III today!

Be the first one to write a review about Diablo 3 !

Still a decent game with plenty of players, just be sure to buy the dlc aswell because that’s where the endgame content is.

It is the game that I played for at least 2 years daily. A must buy!

Will here be some great sale of this game in future ?? looking forward to buy it …