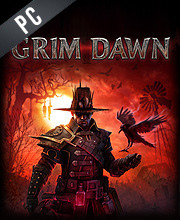 What is Grim Dawn CD key?

It's a digital key that allows you to download Grim Dawn directly to PC from the official Platforms.

How can I find the best prices for Grim Dawn CD keys?

Allkeyshop.com compares the cheapest prices of Grim Dawn on the digital downloads market to find the best sales and discount codes on trusted stores.

Grim Dawn brings players to an apocalyptic fantasy world. This is a time where humanity is slowly getting extinct, trust is not something easily given and iron is much more important than gold.

There is no question that Grim Dawn moves along familiar lines: Base classes, a tragic world inhabited by monsters in a wide variety of flavors, nearly constant loot drops, action-oriented combat, somewhat “lite” yet interesting story, etc. Somehow, though, Grim Dawn just does it better than any other ARPG in recent memory.

Grim Dawn is one of the easiest ARPGs to recommend in recent years.

Find all the best prices for Grim Dawn DLCs on Allkeyshop

Zoom 1m 3m 1y All
Track product
GOG.COM CD KEY : You need to register on Gog.com, then use the GOG Key to download and activate your game to play Grim Dawn.
EU STEAM CD KEY: Requires an EUROPEAN IP address or you must activate it with a VPN (Virtual Private Network) in order to play Grim Dawn. Might have languages restrictions or language packs. Read the description on the store game page to know if the EU IP is only needed for activation or for playing also (maybe on EU Servers). Most of the stores offer you their help, or show you how to do this with a tutorial to follow.
EUROPEAN STEAM GIFT : It’s a steam gift for Europe which requires an European IP address to activate and to play Grim Dawn on Steam. Read carefully the store description about region and language restrictions.
STEAM GIFT : A Steam gift is a one-time transfer you receive. You activate and install Grim Dawn to play on Steam, it is a non-refundable game that stays in your Steam games collection. Please read the store description about any language or region restrictions.
STEAM CD KEY : Use the Steam Key Code on Steam Platform to download and play Grim Dawn. You must login to your Steam Account or create one for free. Download the (Steam Client HERE). Then once you login, click Add a Game (located in the bottom Left corner) -> Activate a Product on Steam. There type in your CD Key and the game will be activated and added to your Steam account game library.
Definitive Edition
Standard Edition
Compare Choose & Buy Download (772)

Had good time, if you are a moba player that enjoys stutter stepping and getting rewarded for good mechanics you’ll find it there

Dont buy this game on GoG..com . They dont sell cd keys . You wont be able to play with steam players . The price lies to you its a good deal. You wont get anything . They shouldnt be visible at all in the seller list ..

This game is much better than diablo 3 and Path of exile combined. Must have it!