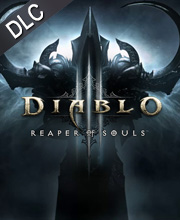 What is Diablo 3 Reaper of Souls CD key?

It's a digital key that allows you to download Diablo 3 Reaper of Souls directly to PC from the official Platforms.

How can I find the best prices for Diablo 3 Reaper of Souls CD keys?

Allkeyshop.com compares the cheapest prices of Diablo 3 Reaper of Souls on the digital downloads market to find the best sales and discount codes on trusted stores.

Expand the story of the epic action RPG, Diablo III, with Diablo III: Reaper of Souls!

Featuring the all-new, action-packed Act V, this expansion also introduces the new Crusader class and also increases the game’s level cap to level 70. Existing characters will also benefit from new spells and abilities from this add-on.

Reaper of Souls has also redesigned the game’s looting system, focusing on rewarding players with more treasures through “smart drops”. It also includes new and improved multi-level Legendary items, and a third artisan – called the Mystic – who can augment an item’s power and appearance.

A new Adventure Mode has also been added on this expansion, giving players the freedom to explore the game and play it however they want it to be played. With all waypoints now unlocked, and with the waypoint list replaced with a map, players can explore all they want!

Get these and more only from Diablo 3: Reaper of Souls!

Low price, for a good game! Thanks AllKeyShop! All you need is in this site for buy nice game at nice price!

People are craaaazy about this game. I never liked it as much though

diablo 3 reaper of souls is very nice game …
i love like this the games …
thanks (allkeyshop) .