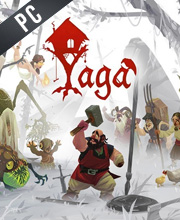 What is Yaga CD key?

It's a digital key that allows you to download Yaga directly to PC from the official Platforms.

How can I find the best prices for Yaga CD keys?

Despite some of the issues I had with it, playing Yaga felt like reading my favorite folktale but better, because this time I got to star in it. Let’s just hope the next time I spin a yarn I get better luck and find Ivan a wife to make his babushka proud.

I really wanted to fall in love with Yaga. The world and character of the game is just incredible, but it’s hard to overlook the gameplay. The tedium of repetitive combat and the baffling bad luck mechanic detract so much from such a promising RPG, and it feels awful to be punished for exploring the crafting system. Ultimately, Yaga’s visual and narrative charm just don’t make up for the boredom and frustration you’ll have to put yourself through to see the story to its conclusion.

The game comes with the main game, soundtrack and dlc.

Zoom 1m 3m 1y All
Track product
BATTLENET EU CD KEY: European Battle.net Key to download and play Yaga on EUROPEAN SERVERS. You must Activate the CD Key on your Battle.net Account or create one for free (HERE). Then, once you login on the Website, click Account Management ==> Add a new game. Enter the Key Code in the field below to add it to your Battle.net account. Once added you can Download the game on any computer at any time.
EPIC GAMES KEY : Region Free / Worldwide. Requires Epic Games Launcher App in order to play the game. You need to create a free account here in order to download Yaga from Epic Plateform . Read the description on the store page about any language or country restrictions.
GOG.COM CD KEY : You need to register on Gog.com, then use the GOG Key to download and activate your game to play Yaga.
EU STEAM CD KEY: Requires an EUROPEAN IP address or you must activate it with a VPN (Virtual Private Network) in order to play Yaga. Might have languages restrictions or language packs. Read the description on the store game page to know if the EU IP is only needed for activation or for playing also (maybe on EU Servers). Most of the stores offer you their help, or show you how to do this with a tutorial to follow.
STEAM CD KEY : Use the Steam Key Code on Steam Platform to download and play Yaga. You must login to your Steam Account or create one for free. Download the (Steam Client HERE). Then once you login, click Add a Game (located in the bottom Left corner) -> Activate a Product on Steam. There type in your CD Key and the game will be activated and added to your Steam account game library.
Armful Edition
Bundle
Standard Edition
Compare Choose & Buy Download (772)