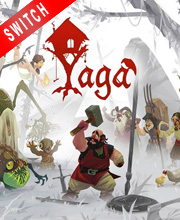 What is Yaga Game Code?

It's a digital key that allows you to download Yaga directly to Nintendo Switch directly from Nintendo eShop.

How can I find the best prices for Yaga on Nintendo Switch ?

The choices you make as you play through Ivan’s adventure do actually affect proceedings enough that the whole thing warrants more than one playthrough and, if you can make peace with that pretty nonsensical bad luck mechanic and uninspiring gameplay, you’ll find a fun little adventure here featuring a cast of characters who are well worth spending some time with.

Yaga is a game you’ll want to like, and some of its brighter qualities may be enough to justify the purchase. If it weren’t so combat-heavy, the unusual fantasy world and narrative could better outshine the action, the way the game deserves.

NINTENDO CODE : This is a digital code for Yaga Nintendo Switch. Use the download code on the Nintendo eShop of your Console. Once connected to the Nintendo eShop, you can enter and redeem the Download Code. Read carefully the store description about any language and region restrictions.
Standard Edition