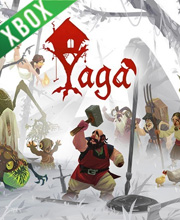 What is Yaga Game Code?

It's a digital key that allows you to download Yaga directly to Xbox One from Xbox Live.

How can I find the best prices for Yaga on Xbox one?

Drawing inspiration from Slavic folklore, Yaga on Xbox One certainly delivers in terms of its narrative and lore. But in terms of combat and environments, it feels underwhelming. Levels get repetitive quickly and the combat system leaves a lot of room for improvement.

A few of Yaga’s game mechanics cripple what would otherwise be an enjoyable pre-modern Slavic tale of witches, kings, magic and a one-armed blacksmith hero. Some core aspects of play aren’t explained fully or not at all, and ironically it’s these fundamentals which help drag the experience down.

Zoom 1m 3m 1y All
Track product
XBOX ONE GAME CODE : Use the Digital Code received by mail in your Xbox One account to download Yaga from the Xbox Live. Internet connection is required. Please read the store description about any language or region restrictions.
Standard Edition
Compare Choose & Buy Download (803)