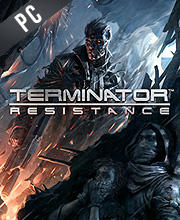 What is Terminator Resistance CD key?

It's a digital key that allows you to download Terminator Resistance directly to PC from the official Platforms.

How can I find the best prices for Terminator Resistance CD keys?

Allkeyshop.com compares the cheapest prices of Terminator Resistance on the digital downloads market to find the best sales and discount codes on trusted stores.

Terminator Resistance is an action, adventure, role-playing video game that is developed by Teyon and published by Reef Entertainment.

This is a first-person shooter that is set in the ‘Future War’ that has been seen in the movies ‘The Terminator’ and ‘T2: Judgement Day’.

In Terminator Resistance, players are able to experience the exciting events that led up to the final battle for mankind against the destructive machines.

Get to choose your way of handling things. You can either run and gun your way through the game or you can also have a slightly stealthy approach by sneaking and hacking through the defenses of Skynet. It is your choice!

Scavenge for scrap in this post-apocalyptic world and get to use them as you craft whatever you need or perhaps trade them for whatever you would need.

There are a group of survivors that you are able to interact with and change the way their life is going.

STEAM CD KEY : Use the Steam Key Code on Steam Platform to download and play Terminator Resistance. You must login to your Steam Account or create one for free. Download the (Steam Client HERE). Then once you login, click Add a Game (located in the bottom Left corner) -> Activate a Product on Steam. There type in your CD Key and the game will be activated and added to your Steam account game library.
EU STEAM CD KEY: Requires an EUROPEAN IP address or you must activate it with a VPN (Virtual Private Network) in order to play Terminator Resistance. Might have languages restrictions or language packs. Read the description on the store game page to know if the EU IP is only needed for activation or for playing also (maybe on EU Servers). Most of the stores offer you their help, or show you how to do this with a tutorial to follow.
EUROPEAN STEAM GIFT : It’s a steam gift for Europe which requires an European IP address to activate and to play Terminator Resistance on Steam. Read carefully the store description about region and language restrictions.
STEAM GIFT : A Steam gift is a one-time transfer you receive. You activate and install Terminator Resistance to play on Steam, it is a non-refundable game that stays in your Steam games collection. Please read the store description about any language or region restrictions.
GOG.COM CD KEY : You need to register on Gog.com, then use the GOG Key to download and activate your game to play Terminator Resistance.
Standard Edition. Read the store description to know the content.

Exemplary!
Truly a great game, it did not disappoint my expectations which, to be honest, were also quite high.
He wants to start from the whole, the game immediately reminded me of the various chapters of the METRO series, the last one in particular.
The crafting and leveling systems of the character are in fact very similar, perhaps in some details even better.
The level design and graphics are also excellent, and these two elements also have a vague aftertaste, pass me the term, "METRO FLAVORED", you want some post apocalyptic settings, you want for the semi-open world, Terminator: Resistence, as well as winking at film and FPS lovers, he does so, especially at Metro.
As for the films, the game is masterfully inserted even at the plot level, without distorting anything, on the contrary, adding details for those who have already seen all the chapters, and still remaining very playable even for the newbies who will surely have finished after want to go and recover the films!
I took it during the sales but, in my opinion, it remains, even at full price, a game ABSOLUTELY to recommend, fantastic!

Waoo this game looks great, i don’t play a Terminator game from the Amiga age!! It’s time to buy it.

“Are you sarah connor?”
“No its the next door”
GRrr toc toc… Next… toc toc… Error system
HF

Looks like a bad game made just to take your money and run, using terminator name to bait people

Hasta la vista, baby 😀
Looks a bit outdated to be honest, but I guess that’s also why it’s so cheap for a new release.. I guess it would still have 4-5 hours of fun at least 🙂

Looks a lot like one of the older (modern) Call of Duty games. Not bad, not great either. It’s a nice game to play once or twice.