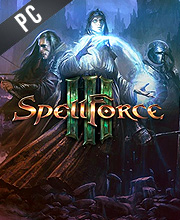 What is SpellForce 3 CD key?

It's a digital key that allows you to download SpellForce 3 directly to PC from the official Platforms.

How can I find the best prices for SpellForce 3 CD keys?

Allkeyshop.com compares the cheapest prices of SpellForce 3 on the digital downloads market to find the best sales and discount codes on trusted stores.

SpellForce 3 is the perfect combination of unique gameplay blending RTS and RPG. It is the year 518. The rebellion of the renegade mages, known as the Mage Wars, has been quashed by the Crown. However, it was a Pyrrhic victory: Whole regions have fallen into anarchy, refugees roam the lands in search of shelter, and a mysterious, deadly plague called the “Bloodburn” has arisen and is spreading rapidly. Command an army of warriors and embark in an amazing adventure to restore peace in the world!

Spellforce 3 is one of the best blends between RTS and RPG in gaming. Staying true to its roots, the game is – first and foremost – made for its fans but it is welcoming to those who are new to the series. A well fleshed out campaign, excellent writing, and satisfying combat are the hallmark of any great RPG. Spellforce 3 adds conquest, base building and RTS battles – what’s not to love.

With co-op and additional skirmish modes available on top of the main campaign, SpellForce 3 is a generous — and largely successful — merger of two genres. While it isn’t the world’s deepest or most complex RPG nor gaming’s most substantial RTS, it is a very effectively constructed and balanced hybrid and most important, makes a strong and compelling case that the mashup works. With over a decade between installments, it’s not like the SpellForce franchise has overstayed its welcome. It’s perfectly timed to delight both fans of the series and surprise new players looking for something new and different.

I’m a pretty big fan of RTS and certainly a big fan of RPG’s, I love being able to dig into a character and forge them the way I would like. Spellforce 3 does a good job of mashing those two genres together and the result is a pretty decent campaign that should have you entertained for quite some time. A little bit of this and a little bit of that, in just the right doses and you get a great game that stands above the sum of it’s parts.

This edition already includes all stories for SpellForce 3

Enjoy all of the games and additional content of the SpellForce franchise in this wonderful pack!

Zoom 1m 3m 1y All
Track product
EPIC GAMES KEY : Region Free / Worldwide. Requires Epic Games Launcher App in order to play the game. You need to create a free account here in order to download SpellForce 3 from Epic Plateform . Read the description on the store page about any language or country restrictions.
GOG.COM CD KEY : You need to register on Gog.com, then use the GOG Key to download and activate your game to play SpellForce 3.
EU STEAM CD KEY: Requires an EUROPEAN IP address or you must activate it with a VPN (Virtual Private Network) in order to play SpellForce 3. Might have languages restrictions or language packs. Read the description on the store game page to know if the EU IP is only needed for activation or for playing also (maybe on EU Servers). Most of the stores offer you their help, or show you how to do this with a tutorial to follow.
STEAM GIFT : A Steam gift is a one-time transfer you receive. You activate and install SpellForce 3 to play on Steam, it is a non-refundable game that stays in your Steam games collection. Please read the store description about any language or region restrictions.
STEAM CD KEY : Use the Steam Key Code on Steam Platform to download and play SpellForce 3. You must login to your Steam Account or create one for free. Download the (Steam Client HERE). Then once you login, click Add a Game (located in the bottom Left corner) -> Activate a Product on Steam. There type in your CD Key and the game will be activated and added to your Steam account game library.
Bundle
Franchise Pack
Standard Edition
Versus Edition
Compare Choose & Buy Download (759)

the story of the game will go way back even before the events of SpellForce: The Order of Dawn. Even though you may not have played any of the previous games of SpellForce, you will still pick up the story easily.

If you want a beautiful Real time strategy game mixed in with RPG and Fantasy then go ahead and buy it, as for me I’ll wait for the price to drop.

This game looks really fun to play! TLook at all the great deals to buy this game a a great low price!

Cool that this has co-op! I wonder how all the RTS duties are handled there.

good graphics = good game all you need in there is strategy