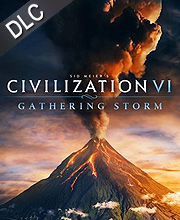 It's a digital key that allows you to download Sid Meier’s Civilization 6 Gathering Storm directly to PC from the official Platforms.

How can I find the best prices for Sid Meier’s Civilization 6 Gathering Storm CD keys?

Being a DLC, players will need to possess the base game Sid Meier’s Civilization VI in order to gain access.

The game is based on a Maori legend which highlights Kupe as the one responsible for the Polynesian discovery of New Zealand in the 10th century. Inspired by said mythology, your role is to preside over an entire planetary ecosystem. Reap the spoils and or have your people suffer the ramifications of your decisions. Become the force upon which an otherwise damned civilization is dependent as you nurture it into a technologically advanced and functional society.

This expansion excels at delivering a high amount of realism as it places more responsibility on the player and introduces a host of new variables heightening the degree of difficulty.

Power and Consumable Resources: Resources that are used to generate electricity and power for industries, factories, equipment etc.

World Congress: Meet the leaders of the world, voice your opinion and encourage progressive ideas.

21st Century Technologies and Civics: The cost of developing modern technology are added negative environmental effects and you must invest in renewable energy sources.

New Leaders and Civilization: There are nine new leaders and eight new civilizations with which you must learn to co-exist.

The preceding list of variables are complimented by improved gameplay systems to enhance your gaming experience Gathering Storm is available as of February 14, 2019 on PC and is attainable through the Steam Store.

I have played a little with Gathering Storm active and I will say that the game is a hell of a lot better with the newest addition. The new diplomatic victory is (for me) fun to achieve. Game also performs better (slightly) and the AI can make a stand (sometimes) against you.

to complicate for me. I will wait anno or settlers until they are not sames…
HF

looks the best game in the series so far. might get when its on offer.

My good and colleague is really into Civilization, as for me i never played the series since the Civ2, but i heard the new one is really-really good. This new DLC might be interesting for anyone playing the game!

good game. its is based on turns. pls ghandi stop the manhattan project.