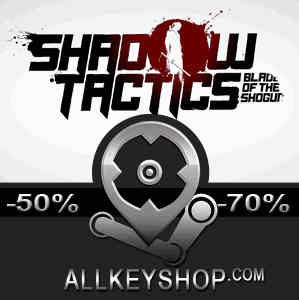 You can participate to these tests by adding comments about your digital download purchase in the store review page. Enjoy the best deals for Shadow Tactics Blades of the Shogun CD Key with Allkeyshop.com!

Shadow Tactics: Blades of the Shogun is a strategy video game developed by Minimi Productions and published by Daedalic Entertainment.

Set in Japan in the Edo period an unlikely group of people joins together to work as a team. Their personalities and skills greatly vary. First is Hayato, an agile ninja who uses a sword and shuriken. Next is the Samurai Mugen who is not so flexible but is unbelievably strong. Aiko is another member of the group who is great with disguises, she can dress up as a Geisha and distract the enemies. A street child is also a part of the group, he is named Yuki and he is great at setting traps and decoys. The last and definitely not the least is the marksman Takuma who is a sure shot using his sniper rifle. He can take out an enemy from a distance.

With their different skills combined, a deadly team is created that can annihilate their enemies.

There are a lot of challenges to overcome in some cases you will be outnumbered ten to one. Since you are dealing with characters with different skill sets you can figure out different ways to take out your opponents. Sneak up on your enemies by making your attacks from above. And if the game is not challenging enough for you, there are three difficulty settings for you to choose from.

Despite the beautiful environment of Japan in the Edo era, blood sheds and mars its beauty. Play Shadow Tactics: Blades of the Shogun and evaluate your options wisely to complete all missions.

Be the first one to write a review about Shadow Tactics Blades of the Shogun !

For me to give a recommendation on a game it must be game of the year material or something really unique with amazing attention to detail and care noticeable and that it’s what this game is a very good game that takes a beloved formula from the commandos series and improves it.

Very recommend it by me!

hrk is the best store to buy Shadow Tactics Blade of the Shogun.

looks interesting, never been a fan of stealth mechanics games, looks to be cheapest at g2a

Looks like an awesome game and i absolutely love this site!

Here you’ll find all the best deals on PC games today, hot deals and free games, just the way you like it my fellow gamers! And for the best deal for Shadow Tactics Blade of the Shogun go to G2A!