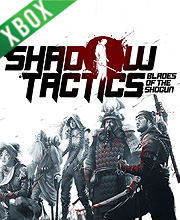 It's a digital key that allows you to download Shadow Tactics Blades of the Shogun directly to Xbox One from Xbox Live.

How can I find the best prices for Shadow Tactics Blades of the Shogun on Xbox one?

Despite its minor camera and screen tearing issues though, Shadow Tactics: Blades of the Shogun is great for those looking for a challenge. Its mix of stealth, strategy, and action is a highly enjoyable one, and with its wealth of missions and bonus objectives, there’s plenty to go at.

Shadow Tactics: Blades of the Shogun brings a particularly brutal challenge, but at no point does it ever feel unfair. With some of the best stealth gameplay, I have seen in a game for some time, and unusually large maps to utilize as a playground, there are many hours of fun to be had with this refreshing tactical showing.