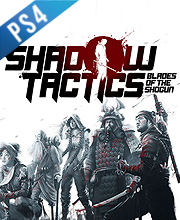 It's a digital key that allows you to download Shadow Tactics Blades of the Shogun directly to Playstation 4 from PSN (Playstation network).

It’s not hyperbole when I say that by recognizing all of its ifs and thoroughly ironing them out, Shadow Tactics: Blades of the Shogun is one of the best tactics titles I’ve ever played, and it’s certainly one of the finest games I’ve played this year. As a masterpiece in nearly every respect, I salute Mimimi Productions and eagerly look forward to their next work.

I can’t recommend Shadow Tactics: Blades of the Shogun enough to fans of strategy and stealth titles. There is a high level of replay value, and there’s a sandbox feel to the levels, so players can determine how to beat them in a variety of ways. The only thing holding it back is the lack of co-op, which makes every game better since I can play it with my younger brother.