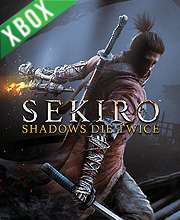 It's a digital key that allows you to download Sekiro Shadows Die Twice directly to Xbox One from Xbox Live.

How can I find the best prices for Sekiro Shadows Die Twice on Xbox one?

Allkeyshop.com compares the cheapest prices of Sekiro Shadows Die Twice on the digital downloads market to find the best sales and discount codes on trusted stores.

You are the “one-armed wolf”, a warrior bound by a life-long duty to protect a young lord from an ancient bloodline.

Like its predecessors, Sekiro will test your mental fortitude to breaking point. Embrace your inner masochist, take on its challenge and you’ll be amazed by the amount of enjoyment you can glean.

Sekiro is an electrifying power trip that demands a lot from the player, but if you let it grip you it will be hard to pull its rickety wooden hand from your wrist.

Going in to this review I wasn’t sure if Sekiro was going to be simply a ninja re-skin of Dark Souls, but there’s more than enough that’s different, and improved, that it stands on its own within the genre, even if it’s from the same developers.

What about Elden Ring…but in Japan?
Just kidding, but not 100%. If you like Souls game, this is for you.

A rhythm game disguised as an RPG (No kidding!). Great looks, great combat, and something pretty unique in my point of view, From Software does truly have an upper hand in their style.

Sekiro: Shadows Die Twice is a challenging game that will test your skills, patience and concentration. If you’re up to the task you’ll find yourself immersed in a beautiful world full of various characters and incredibly rewarding boss fights.

Ninjas, fire, and a whole lot of blood. What more could you want!!

Don’t be fooled by the beauty of Sekiro: Shadows Die Twice! This game is brilliant, but also very challenging. Every little mistake will be punished, however when you learn from them, the results will be rewarded. Amazing graphics and engaging combat system make Sekiro one of the most played games at this time.