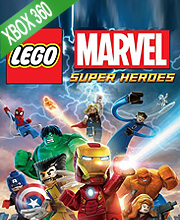 It's a digital key that allows you to download Lego Marvel Super Heroes directly to Xbox 360 from Xbox Live.

How can I find the best prices for Lego Marvel Super Heroes on Xbox 360 ?

Marvel Super Heroes is easy to recommend to both casual and dedicated comics fans. It sticks pretty close to the time-tested formula for LEGO games, and I’m sure that most fans of the series wouldn’t want it any other way.

Ultimately, Lego Marvel marks the first time I’ve had as much fun in the hub world as in the story-based missions. Variety abounds, and the split-screen lets players explore the city on their own. I made it my mission to find bricks and solve the unexpectedly clever puzzles to unlock extras, while my son was happy to rampage through the streets as Venom.

If you are in for a fun adventure, don’t hesitate on buying all of the Lego series games, and this one is no exception!