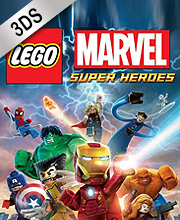 It's a digital key that allows you to download Lego Marvel Super Heroes directly to Nintendo 3DS directly from Nintendo eShop.

How can I find the best prices for Lego Marvel Super Heroes on Nintendo 3DS ?

LEGO Marvel Super Heroes: Universe in Peril is a lengthily titled game that provides a sweet and satisfying portable experience for LEGO and Marvel fans alike. It may not live up to the standards that the console version has set for it, but it still offers up a unique experience that will keep players of all ages entertained for a decent number of hours. Long load times, ugly cinematics, and finicky touch controls aside, the fun mission structure and engaging gameplay makes this one worth picking up for anyone seeking big fun in small bursts.

LEGO Marvel Super Heroes is the best thing to happen to Marvel games since 2006’s Marvel Ultimate Alliance. It’s a warm and witty, multi-layered approach to the brand that ties in hundreds of Marvel’s most iconic characters, settings, and stories. While you can knock out the campaign story in around eight hours, the world is rich with content, and I’ve found myself up late every night for the past week playing for “just one more hour.” It may not offer the challenge or player-driven context of this year’s other open-world games, but those games would be hard-pressed to deliver as much fun and happiness as you’ll find in Traveler’s Tales latest. ‘Nuff said.