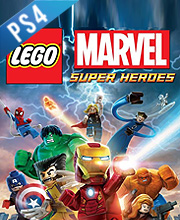 It's a digital key that allows you to download LEGO Marvel Super Heroes directly to Playstation 4 from PSN (Playstation network).

Allkeyshop.com compares the cheapest prices of LEGO Marvel Super Heroes on the digital downloads market to find the best sales and discount codes on trusted stores.

LEGO Marvel Super Heroes  represents Traveler’s Tales finest work with the LEGO property. All of the requisite hooks are there: a fun story, good humor, solid gameplay and healthy challenges. The studio’s reverence for the source material really pays off in the end, with content and character options that should be more than enough for any type of Marvel fan.

The Asgard Pack includes the characters from the movie Thor: The Dark World. Play as Sif, Odin, and the Warriors Three: Volstagg, Hogun, and Fandral.

Find all the best prices for LEGO Marvel Super Heroes on Allkeyshop!