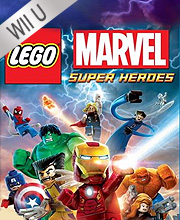 It's a digital key that allows you to download Lego Marvel Super Heroes directly to Nintendo Wii U from Nintendo eShop.

How can I find the best prices for Lego Marvel Super Heroes on Wii U ?

Everything about LEGO Marvel Super Heroes feels like a labor of love from TT Games. While it could have easily cut down on the amount of content and created just as successful a title, it instead built something far bigger. The result is a game filled with diverse playable characters, a New York City that feels ripped out of the comics and sights and sounds that bring the whole thing to life

Lego Marvel Super Heroes is fantastic. The length of the game feels right, and the number of secrets and alternate avenues in each stage really encourages multiple playthroughs. The character roster may be numerous, but each one is handled in such a way that they feel true to form. The game is still a ton of fun while looking great, and in a rare move, the Wii U version isn’t shortchanged. Unless you don’t care for either Marvel or LEGO, this game is definitely worth picking up.

Zoom 1m 3m 1y All
Track product
NINTENDO CODE : This is a digital code for Lego Marvel Super Heroes. Use the download code on the Nintendo eShop of your Console. Once connected to the Nintendo eShop, you can enter and redeem the Download Code. Read carefully the store description about any language and region restrictions.
Standard Edition
Compare Choose & Buy Download (759)

Personally not a great fan of LEGO games but this one seems pretty nice!