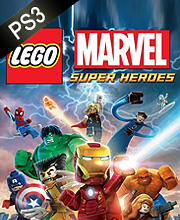 It's a digital key that allows you to download Lego Marvel Super Heroes directly to Playstation 3 directly from PSN (PlayStation Network).

How can I find the best prices for Lego Marvel Super Heroes on Playstation 3 ?

LEGO Marvel Super Heroes is a great game. It is a game that is for the kid in all of us. It is a game for the fanboys and girls of the Marvel Universe. It has taken things from other LEGO games and graduated to the next logical step. If you have been looking for something to sit back and enjoy, this might just be it. It is simple fun, and it shows Traveler’s Tales knows its audience. There are many things to be thankful for in this game, and the best one is that we have a Marvel game injected with the fun of the LEGO franchise.

Lego Marvel isn’t the most polished game you’ve ever seen, but it doesn’t pretend to be. Instead what you get is a fun action-platformer for young and old that is filled to the brim with Marvel fan service, offers tons of content and entertainment, and is a great latest instalment in what continues to be one of the most enjoyable couch co-op series out there.

This edition is exclusively available in Germany and in Austria.

Be the first one to write a review about Lego Marvel Super Heroes !