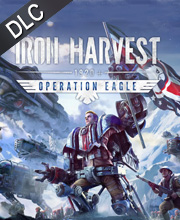 It's a digital key that allows you to download Iron Harvest Operation Eagle DLC directly to PC from the official Platforms.

How can I find the best prices for Iron Harvest Operation Eagle DLC CD keys?

A new Power steps into the World stage, in Operation Eagle an Iron Harvest DLC, In the aftermath of the great war the borders of the world are being redrawn. The country Usonia feared it was being left out and saw the opportunity to show their hand.