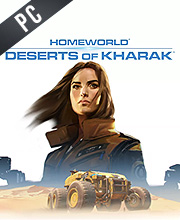 What is Homeworld Deserts of Kharak CD key?

It's a digital key that allows you to download Homeworld Deserts of Kharak directly to PC from the official Platforms.

How can I find the best prices for Homeworld Deserts of Kharak CD keys?

Allkeyshop.com compares the cheapest prices of Homeworld Deserts of Kharak on the digital downloads market to find the best sales and discount codes on trusted stores.

Homewold: Deserts of Kharak is a real time strategy video game that has been developed by Blackbird Interactive and published by Gearbox Software.

Set one hundred and six years before the events of Homeworld. The Homeworld Deserts of Kharak will bring you to the dying desert planet of Kharak. A coalition was sent by the Northern Kiithid to investigate the Jaracai Object which is an unknown object found in the deep desert. The coalition disappears. Another one is sent out after four years and this time it is headed by Rachel S’jet.

You will get to experience great tactical combat. The sands are vast, you must know where to position your fleet to have the upper hand on the situation. You can plan ambushes or strategize by attacking the enemy’s resources or creeping up behind their military.

Your fleet will consist of different types of land and air vehicles that are meant to take on the difficult terrain of the desert. Take your pick from the light weight to the much more heavy vehicles, and lead your fleet to victory!

Have the option to play the game solo or even in an online multiplayer. Different modes will also be available to keep the game more interesting.

Face the desert and its hostilities to be able to find your Homeworld.

HRK has a great deal for Homeworld Deserts of Kharak. This game it’s a decent RTS. The single player campaign is short but the story is good. Recommend.

Looks a lot like Ground Control, actually.﻿ thank you allkeyshop