15 of the Best Inventory Management Games and Compare Prices

“You want to play an Inventory Management Games, but don’t know which one to choose?

Luckily Allkeyshop is here to help you with this top 15 of the best Inventory Management Games!”

What are the Top 15 Best Inventory Management Games 2020 ?

Step into the Ring of Pain and do battle in randomly generated dungeons in a dungeon card crawler where you choose your path. Fight through more than a dozen paths, experience multiple endings, and claim loot and exclusive Hard mode items if you’re willing to try. There are almost 200 items to unlock, over 40 creatures to face, and four different regions to survive in.

Manage a train company and build it into a thriving empire as you take your trains across a hand-crafted pixel world. Travel a world that keeps on moving even when you’re not playing, and customize your train to keep your passengers happy.

Explore an old land where fear and sin take form and choose to bring the people justice or dominate them with unmatched power. Equip your fighters within your army individually and wage war on your enemies using a range of weapons, spells, and abilities. Play through the epic campaign and edit scenarios with the in-game editor and developer tools.

Lead a group of Dwarves on a mining operation as they establish a colony and search for glory and riches away from the war that rages above ground. Search for the rarest materials by mining deeper, craft the most incredible weapons, and sell them to those willing to pay. The game is bundled with its SDK, meaning you can mod and write systems to make the game you want from it.

Learn to craft powerful weapons and then sell them for profit as you gain experience and wealth beyond your imagination. Craft swords using the intricate crafting system to carefully piece the sword together in parts from materials chosen by you. There is no limit to your potential with an expected 10+ billion variations of swords available to forge.

Select from six unique classes, learn hundreds of skills, and fight for survival in a world where iron is more valuable than gold. Earn favor, make difficult choices, and devote yourself to rebuilding the world. Play together with up to 4-player support, and defeat enemy heroes and bosses, and rogue-like dungeons.

Save the world from the Goblinoid army that has risen from the ashes of war and threaten the existence of the Ten Towns. Go on an epic journey and build a powerful party capable of wielding magical weapons, casting spells, and willing enough to sacrifice themselves for the good of the world.

Lo Wang returns with an arsenal of over 70 guns and blades and his unique archaic magic to defeat the demonic enemies that threaten humanity. Battle through procedural levels, discover new paths, and choose the right weapon for the job to dismantle, dismember, or pierce your enemies. Play through the rich campaign alone or team up with up to 4-player co-op support available, and tackle the challenges together in unique missions.

Recruit, train and lead a team of flawed heroes in this gothic roguelike turn-based RPG that puts emphasis on the psychological stresses of adventuring. The game has a number of difficulty levels. Darkest is the game’s normal mode, Radiant reduces the campaign length but maintains the difficulty level. Lastly, Stygian gives enemies increased health and forces the player to complete the game in 86 in-game weeks or before losing 13 heroes. Darkest Dungeon has plenty of content, and its DLC packs all add extra enemies, quests, and heroes to ensure you keep going back into the dark for more punishment.

The latest looter-shooter from Gearbox puts you in control of one of four Vault Hunters, each with unique abilities, playstyles, skill trees, and customization options. Make use of an infinite amount of guns and gadgets, discover new worlds, each with unique environments and enemies, and do it all in co-op mode.

Play as Geralt, a highly trained monster slayer for hire in a visually stunning, story-driven RPG world where you must hunt down the Child of Prophecy – a living weapon that can alter the shape of the world. The main storyline in the game has more than 50 quests, and if you want to complete all quests from the game and its DLCs, you will need to complete more than 400 quests. The Complete Edition features all released content, including DLC, and more than 150 hours of gameplay.

Rise as the Ashen One, an Unkindled, and link the fire by returning Prince Lothric and the Lords of the Cinder to their thrones in Firelink Shrine. Dark Souls 3 encourages exploration by featuring fewer maps than Dark Souls 2 but making the maps more extensive and detailed. The game features two Estus Flasks for the first time in the series. The first refills hit points and the second refills focus points.

Influence the fate of Ancient Greece and uncover the secrets of your past in the latest of the Assassin’s Creed franchise. Players can choose to play as siblings Alexios or Kassandra, with multiple endings available. Customize your gear, ship, and special abilities, and play your part in epic large-scale battles as you forge your legend.

What is an Inventory Management Game ?

Inventory management games add an extra layer of difficulty for the player by forcing them to manage their inventory space carefully. 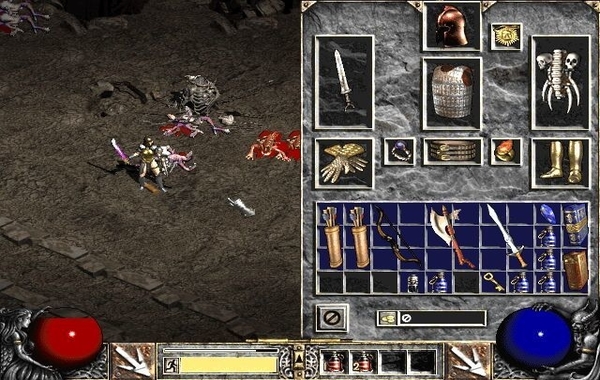 These games use different systems, with some having space for weapons, items, and armor, whereas others are much more strict and will force the player to make choices as to what to keep and what to drop.

A large part of inventory management games is knowing when to sell. Having to backtrack or grind dungeons to earn loot, materials, and money for crafting and selling is what makes these games highly appealing to some.

Why Are We Doing a Top 15 Inventory Management Games List?

Inventory Management Games are available at incredible prices, but with so many to choose from, we want to help you pick the game that’s right for you.