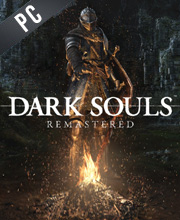 It's a digital key that allows you to download Dark Souls Remastered directly to PC from the official Platforms.

How can I find the best prices for Dark Souls Remastered CD keys?

Allkeyshop.com compares the cheapest prices of Dark Souls Remastered on the digital downloads market to find the best sales and discount codes on trusted stores.

Dark Souls Remastered is an action video game developed by QLOC and published by FromSoftware, Inc. and Bandai Namco Entertainment.

Return to Lordran which has been beautifully remastered with stunning high definition detail that it could run up to 60 fps. Get to re-experience this genre defining game that started it all! This remastered version would include both the main game plus the Artorias of the Abyss DLC.

Be drawn once again into the epic dark fantasy universe that has been hit by a curse and is decaying. This is an intricate world that has hidden passages, dungeons as well as some secrets. The game has a deeply rooted lore that you would want to explore once again.

New surprises are just around the corner as every playthrough will come with new challenges. And surely you will be challenged to complete the game more than once.

Offering you a lot of combination possibilities with weaponry, armor, magic, and crafting. The game also includes The Way of the Multiplayer that can accommodate up to six players with dedicated servers!

EU STEAM CD KEY: Requires an EUROPEAN IP address or you must activate it with a VPN (Virtual Private Network) in order to play Dark Souls Remastered. Might have languages restrictions or language packs. Read the description on the store game page to know if the EU IP is only needed for activation or for playing also (maybe on EU Servers). Most of the stores offer you their help, or show you how to do this with a tutorial to follow.
EUROPEAN STEAM GIFT : It’s a steam gift for Europe which requires an European IP address to activate and to play Dark Souls Remastered on Steam. Read carefully the store description about region and language restrictions.
STEAM GIFT : A Steam gift is a one-time transfer you receive. You activate and install Dark Souls Remastered to play on Steam, it is a non-refundable game that stays in your Steam games collection. Please read the store description about any language or region restrictions.
STEAM CD KEY : Use the Steam Key Code on Steam Platform to download and play Dark Souls Remastered. You must login to your Steam Account or create one for free. Download the (Steam Client HERE). Then once you login, click Add a Game (located in the bottom Left corner) -> Activate a Product on Steam. There type in your CD Key and the game will be activated and added to your Steam account game library.
STEAM KEY ROW : It means for Rest Of the World countries which are not concerned by the region restrictions. This product can't be purchased and activated in Several countries. Please read the store description to know the full list of countries which are concerned. Use the key to Download and play Dark Souls Remastered on Steam.
Bundle
Complete Pack
Remastered Edition
Standard Edition

This game, after all these years, still gives me thrills like no other game can.. It’s savage, it’s dark and it’s even better in 144 fps!