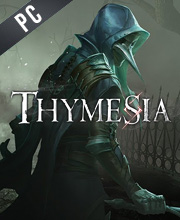 What is Thymesia CD key?

It's a digital key that allows you to download Thymesia directly to PC from the official Platforms.

How can I find the best prices for Thymesia CD keys?

Allkeyshop.com compares the cheapest prices of Thymesia on the digital downloads market to find the best sales and discount codes on trusted stores.

Thymesia is a souls-like action RPG with fast-paced combat and an intricate plague-powered weapon system, developed by OverBorder Studios. This kingdom once thrived and prospered, because of the fruits of alchemy but so much power came with a dark price, and in their attempt to stop its use, it backfired. Within a few days, the kingdom was engulfed in chaos and the streets were infested with all kinds of abominations. Step into the shoes of a mysterious character known only as “Corvus” as he tries to recover his lost memories whilst fighting the monsters that roam the streets by harnessing the power of diseases and plagues.

Thymesia is a Soulslike that rewards aggression and precision; more methodical or sword and board players might want to look elsewhere.

Even with these blemishes and moments where the admiration for what’s come before gets in the way of basic consistency and much-needed fluidity, OverBorder Studio have at least landed in a much better position with a foundation that’s challenging and entertainingly so.

Still, at 10 hours, Thymesia is short enough that it doesn’t overstay its welcome. You wind up feeling more like a general badass than a vastly overpowered killing machine for the most part, and the game’s great ideas culminate in some intense, memorable boss fights. While a few elements of the overall experience don’t gel, Thymesia understands what matters most about its inspirations, while adding a few spins of its own to create a small, smart, and rewarding Souls-like experience.

Zoom 1m 3m 1y All
Track product
GOG.COM CD KEY : You need to register on Gog.com, then use the GOG Key to download and activate your game to play Thymesia.
EU STEAM CD KEY: Requires an EUROPEAN IP address or you must activate it with a VPN (Virtual Private Network) in order to play Thymesia. Might have languages restrictions or language packs. Read the description on the store game page to know if the EU IP is only needed for activation or for playing also (maybe on EU Servers). Most of the stores offer you their help, or show you how to do this with a tutorial to follow.
EUROPEAN STEAM GIFT : It’s a steam gift for Europe which requires an European IP address to activate and to play Thymesia on Steam. Read carefully the store description about region and language restrictions.
STEAM CD KEY : Use the Steam Key Code on Steam Platform to download and play Thymesia. You must login to your Steam Account or create one for free. Download the (Steam Client HERE). Then once you login, click Add a Game (located in the bottom Left corner) -> Activate a Product on Steam. There type in your CD Key and the game will be activated and added to your Steam account game library.
STEAM KEY ROW : It means for Rest Of the World countries which are not concerned by the region restrictions. This product can't be purchased and activated in Several countries. Please read the store description to know the full list of countries which are concerned. Use the key to Download and play Thymesia on Steam.
Deluxe Edition
Standard Edition
Compare Choose & Buy Download (772)