15 of the Best RTT Games and Compare Prices

“You want to play a RTT Games, but don’t know which one to choose?

Luckily Allkeyshop is here to help you with this top 15 of the best RTT Games!”

The Wild West comes to life in vivid detail in this hardcore tactical stealth game where a good plan is better than a pistol. Take control of five unique characters, each with specific skills, and take on large groups of enemies using planning and flawless execution. Discover frontier towns, swamps, and modern cities in a living, breathing world full of character and color. Take out your enemies using traps, pistols, gas, syringes, and lures. Survival is only achieved through the careful choices that you make.


Wage guerilla warfare on German forces in missions that promote free-thinking. Build and expand your base as you recruit new resistance members. Plan and execute ambushes, and fight back utilizing the environment and tactical pauses.


Deploy units and tackle emergencies in real-time. Adapt in the field to unexpected situations and utilize units from four branches of emergency services. The game features three campaigns and multiple game modes for single-player and multiplayer.


Play across three dynamic campaigns that feature all 12 factions from the tabletop game. Use strategy and cunning to destroy your enemies in real-time tactical warfare. Fight against others on other platforms in an optimized multiplayer experience.

6. Shadow Tactics: Blades of the Shogun

Take control of a deadly group of warriors in a story rich with assassination and espionage. Take out enemies with stealth or force using the five characters and their unique skills. Climb rooftops, scale buildings, jump from roof to roof, and explore the environments the way you want to. Choose from three difficulty levels and make the decisions that will mean victory or death for your group.

Command troops in real-time and defend against Viking invaders. Plan and manage your defenses on procedurally-generated islands. Upgrade your troops and turn them into veteran warriors.


Design your deck and repel enemy hordes in fast-paced, real-time combat. Unlock over 500 cards, discover multiple endings, and direct your rats from a choice of six leaders. Discover a new game every time you play with over 100 unique events.


Take your place in a brutal war between rabbits and pigs. Use scout vehicles, rocket launchers, and air support to dominate the battlefield. Complete two epic single-player campaigns and jump online for battles for up to eight players.


Be a captain and sail the world, exploring uniquely themed islands full of spiders, cannibals, and ghost ships. Take on quests, fight supernatural enemies in brutal combat, and climb the ranks of the Sword of the Cult as you reclaim what was yours.


Create a character and enter a post-apocalyptic wasteland full of danger, diverse characters, and adventure. Fight for survival in a brutal single-player campaign containing 16 missions. The game features plenty of PvP and co-op modes and an extensive map editor.


The Warhammer universe comes to life in a breath-taking campaign of exploration, expansion, and conquest, as you control thousands of troops and monsters in epic real-time strategy battles. Build your empire using statecraft, diplomacy, and exploration. Level up your Legendary Lords and Heroes, and arm them with mythical weapons and armor. Play as one of eight Legendary Lords and any of the four races, offering a unique playstyle, campaign mechanics, armies, monsters, and army abilities. Conquer the world alone or together as you smash your way through your enemies with cunning or brute force.

Lead a group of commandos behind enemy lines and destroy the German war machine. Interact with the environment and plan from the shadows until you’re ready to attack. Tackle ten missions across nine locations in authentic World War 2 scenarios.

What is a RTT Game?

A real-time tactics (RTT) video game is a subgenre of strategy without the mechanics of base building and resource collection. 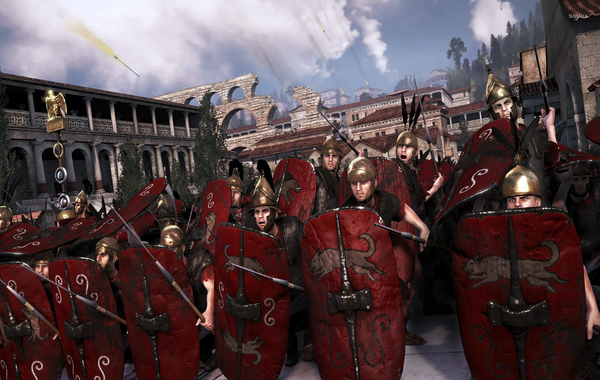 The action in RTT games happens in real-time, and many have a pause-at-will feature.

Battlefields or scenarios are dynamic and challenge the player’s adaptability, positioning, and strategy.

Why Are We Doing a Top 15 RTT Games List?

RTT Games are available at incredible prices, but with so many to choose from, we want to help you pick the game that’s right for you.