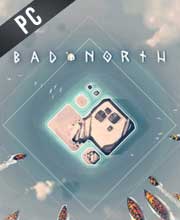 What is Bad North CD key?

It's a digital key that allows you to download Bad North directly to PC from the official Platforms.

How can I find the best prices for Bad North CD keys?

Allkeyshop.com compares the cheapest prices of Bad North on the digital downloads market to find the best sales and discount codes on trusted stores.

Bad North is an action, simulation video game that is developed by Plausible Concept and published by Raw Fury.

You must defend your island kingdom from the Viking invaders. The game offers a roguelite real-time tactics which is brutal and at the same time charming. You have to take full command of your loyal subjects and take full advantage of the unique shape of your island tactical wise.

The islands are beautiful and procedurally generated it also has adorable little soldiers that are just charming, a sharp contrast to the realities of a bloodstained war.

Players get to control the battle by giving high-level commands. You must position your troops and relocate them as needed in order to fend off the invading vikings. You must know when to battle and when to evacuate. If by chance you lose a commander, they are gone forever. When you lose everything then it is the end for you.

After positioning your troops, they will do the rest with the game’s intelligent unit control. Your islands are also procedurally generated so study it and know which locations are the best.

If your defense is strong and smart enough you will reap the rewards of it, develop your subjects by unlocking those upgrades.

EPIC GAMES KEY : Region Free / Worldwide. Requires Epic Games Launcher App in order to play the game. You need to create a free account here in order to download Bad North from Epic Plateform . Read the description on the store page about any language or country restrictions.
GOG.COM CD KEY : You need to register on Gog.com, then use the GOG Key to download and activate your game to play Bad North.
EU STEAM CD KEY: Requires an EUROPEAN IP address or you must activate it with a VPN (Virtual Private Network) in order to play Bad North. Might have languages restrictions or language packs. Read the description on the store game page to know if the EU IP is only needed for activation or for playing also (maybe on EU Servers). Most of the stores offer you their help, or show you how to do this with a tutorial to follow.
EUROPEAN STEAM GIFT : It’s a steam gift for Europe which requires an European IP address to activate and to play Bad North on Steam. Read carefully the store description about region and language restrictions.
STEAM CD KEY : Use the Steam Key Code on Steam Platform to download and play Bad North. You must login to your Steam Account or create one for free. Download the (Steam Client HERE). Then once you login, click Add a Game (located in the bottom Left corner) -> Activate a Product on Steam. There type in your CD Key and the game will be activated and added to your Steam account game library.
Windows 10 Global : This is an Worldwide Microsoft code to play on PC for Worldwide . You need to have installed Windows 10 Anniversary Edition update on your PC. Log into your Microsoft account to download and play. Read closely the description given by the store to activate your game.
Deluxe Edition
Jotunn Edition
Standard Edition