15 of the Best Tower Defense Games and Compare Prices

“You want to play a Tower Defense Games, but don’t know which one to choose?

Luckily Allkeyshop is here to help you with this top 15 of the best Tower Defense Games!”

Build and defend your colony from billions of infected in a post-apocalyptic world where you survive as one of the last humans. Play a stunning campaign featuring 48 missions, 90 available technologies, and uncover how the pandemic began. Build your army and keep them happy with food and money, and build a fortress to house them with walls, gates, and towers. In They Are Billions, survival is never guaranteed, and death is only on the other side of the wall.


Jump into a colorful and massive 3D tower defense game that promises endless hours of strategy fun. Craft and perfect your defense across 37 original maps, with vibrant new monkey animations and upgrade skins. There are now 21 powerful monkey towers, each with three upgrade paths and over 100 meta-upgrades that buff monkey towers or monkey groups. Play anywhere with a single-player offline mode or play co-op in new modes that are added to the difficulties such as Restricted Monkeys, Double Health and the Brutal CHIMPS rules.


Create supply chains, collect and manage resources, and defend your structures in a hardcore tower defense game full of conveyor belts, drones, and drills. Complete the cmapaign, battling through a dozen zones, research new technology, utilize mechs and ships, and unlock dozens of achievements are you battle it out in cross-platform action, including co-op and team-based PvP.


This franchise prequel offers all-new towers and troops. You will unleash more than 18 abilities to destroy powerful enemies and defeat epic bosses. The game offers various difficulties to satisfy new and veteran players.


Defend against physics-based Creeper with wave mechanics. Utilize land, air, and orbital weapons. With the map editor, you can download and create community-crafted missions, units, and game modes.


Defend your kingdom with 18 brand-new towers, each with unique abilities and special powers. Utilize 13 all-powerful heroes and level them up to improve their abilities. Learn to defeat your enemies by carefully studying the in-game encyclopedia.

Combine 6 powerful elements to create 44 unique towers and battle through 28 missions. Play with up to 8 friends in cross-region multiplayer. You can also compete against other players on the online leaderboards.


Manage your village in the day and defend it against monsters at night. Build a maze of walls to keep your villagers alive or build an army of guards to defend the village. Several game modes include Peaceful, Nightmare, and Sandbox.

Command troops in real-time and defend against Viking invaders. Plan and manage your defenses on procedurally-generated islands. Upgrade your troops and turn them into veteran warriors.


Defend X-Morph harvesters from incoming waves of enemies using a combination of top-down shooter and tower defense mechanics. You can attack enemies by morphing into four unique forms, each with basic and special charged attacks. Every boss is unique, and you can destroy the environment to utilize different strategies.


Defend your treasures by building towers of orcs, demons, and undead. The three tower types have unique unlockable skills. The game features 24 levels and a variety of enemies, each with unique abilities.

Kill enemies to collect coins to build and maintain your expanding kingdom. Recruit subjects that will build, defend, and attack. The game does not hold your hand, and you will learn to play it on your own.


Defend yourself from zombies with the help of powerful heroes, epic gear, and god-like skills. Build 12 different towers, each with a unique research tree. Kill more than 50 different types of enemies and multiple bosses.


The game blends deckbuilding and roguelike mechanics to create a highly replayable tower defense. Every run offers unique rewards and unlocks. There are more than 20 levels, with more than a dozen achievements to unlock.

What is a Tower Defense Game?

In a tower defense (TD) video game, players must protect their territories and structures from enemies. 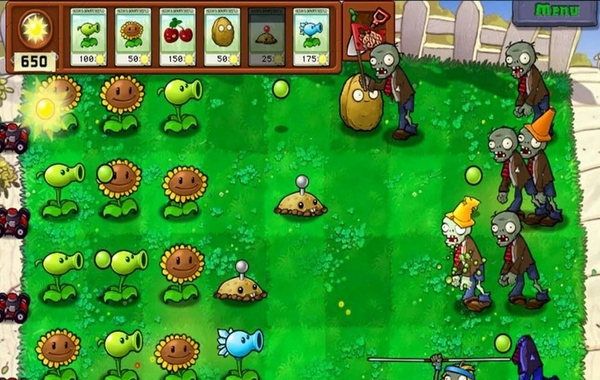 In a TD, the player earns currency or experience by defeating enemies.

Before every wave, players can spend earned currency or experience to upgrade, repair, or unlock abilities and structures.

Why Are We Doing a Top 15 Tower Defense Games List?

Tower Defense Games are available at incredible prices, but with so many to choose from, we want to help you pick the game that’s right for you.